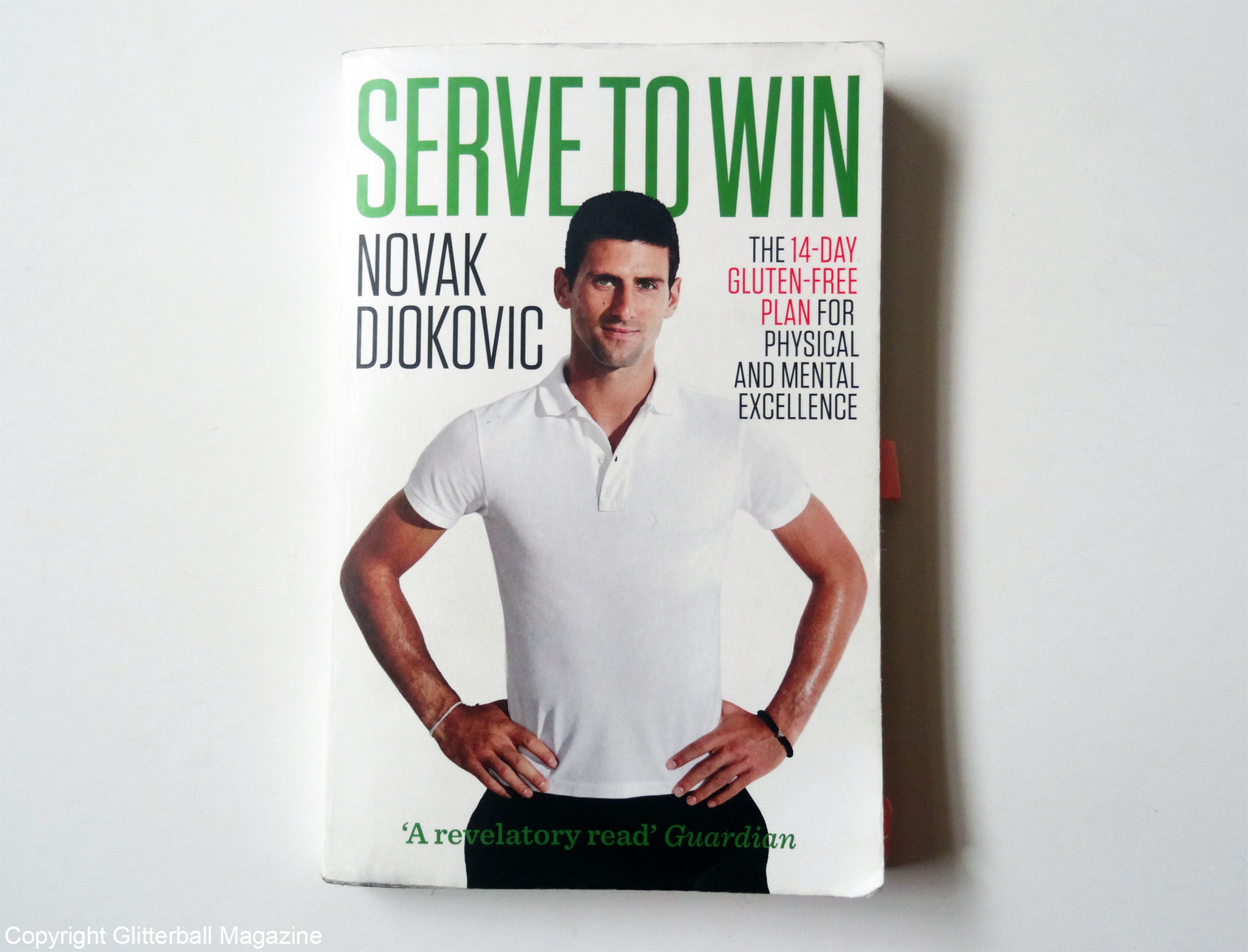 If I could have anyone as my personal trainer, it would have to be Novak Djokovic (Novak, if you’re reading this, I’m always available for workouts). He’s a great role model. He’s dedicated to tennis and is very vocal about following a gluten-free diet which is the subject of his book, Serve To Win: The 14-Day Gluten-free Plan for Physical and Mental Excellence.

I usually don’t write about diets on my blog because I believe we should be happy in our own skin. However, it’s for this exact reason that I wanted to review Serve To Win. It looks at how gluten intolerance can negatively affect our bodies.

As a fellow gluten-free advocate, it warms my heart to know that my favourite sports person shares my passion for healthy eating and living a gluten-free life. I must confess, I bought this book several years ago because I’m a huge fan of Djokovic and it’s never far from my side. I always re-read it.

The book begins with a foreword by William Davis M.D. (cardiologist and author of Wheat Belly), which pinpoints Djokovic’s downfall many years ago: modern wheat which has the ability to “ruin digestive health” and cause many health conditions, including inflammation.

Gluten is a protein found in wheat. Davis admits that gluten has “the potential to cripple performance, cloud mental focus and bring a champion to his knees.”

Djokovic’s disastrous performances on the court in 2010 resulted in him losing tournaments, suffering from abdominal discomfort and enduring various medical time outs. Fast forward two years and everything changed. The only difference? Djokovic overhauled his diet and eliminated “healthy whole grains”.

Shortly afterwards he won three Grand Slams and 50 of 51 tournaments in 12 months to become the world’s number one. Impressive, right? Even rival Rafael Nadal was amazed at his vast improvement, saying Djokovic represented “the highest level of tennis.”

Djokovic begins Serve To Win by reliving his 2006 Croatia Open final. He’d hit rock bottom with a pain in his legs and chest. He refers to moments like this as “the Curse”. Over the years, he continued to collapse on the court. Nobody knew what was wrong so unfortunately nobody could help him.

Until Dr. Igor Cetojevic stepped in. The nutritionist witnessed Djokovic’s 2010 Australian Open match and immediately knew his poor performance was due to food sensitivity and an imbalance in his digestive system. Dr Cetojevic advised Djokovic about following the correct diet for his body.

Dr. Cetojevic challenged him to avoid eating gluten for 14 days and see how he felt afterwards. Djokovic says he felt better once he ate the foods that were right for his body. His life had changed.

His allergies and asthma disappeared. Djokovic was so impressed with the improvement that he had to share his experience.

After a fortnight, Djokovic ate a bagel and felt terrible. Dr Cetojevic says this is common when we eat a food we’re intolerant to.

Rather than telling us to exclude gluten from our diets forever, Djokovic asks us to consider removing it for 14 days, like him and see if there’s an improvement.

What I love most about this book is Djokovic’s honesty and friendly reassurance. Unlike many other authors in this field, who may write in stricter approach, Djokovic offers advice based on his own experiences of how going gluten-free has changed his quality of life and his performance on the tennis court.

Djokovic acknowledges that his healthy eating plan might not be for everyone and admits that he initially struggled with the idea of going gluten-free (he grew up surrounded by traditional Serbian and Italian foods such as cakes, pasta and pizza).

As well as discussing food and nutrition, Serve To Win looks at Djokovic’s struggle in war-stricken Belgrade, Serbia to practice tennis. It’s inspiring to read how he avoided bomb explosions to follow his dreams of succeeding and be the world’s number one tennis player.

Serve To Win is a great book to refer back to, whether you want to know about hidden food sources of gluten or if you’re after delicious gluten-free recipes.

Djokovic highlights the importance of how a changed approach to eating can be extremely positive but sympathises that whatever works for him might not necessarily suit everyone.

He believes every organ in our body has a time when it heals itself. He breaksdown the time for each organ and what we should be eating or drinking at that time.

You don’t have to be an athlete to make nutritional changes. Serve To Win focuses on improving our bodies, health and mindset. Djokovic encourages us to find the best diet that works for us. I’m eternally grateful.

Serve To Win: The 14-Day Gluten-free Plan for Physical and Mental Excellence, Waterstones, £7.99

I’ll be honest, I really don’t know how I managed without Korean sheet masks before. They are, quite simply, the MOST...
COPYRIGHT MICHELLE WINTER 2015-2020. ALL RIGHTS RESERVED. NO CONTENT TO BE REPUBLISHED WITHOUT PRIOR WRITTEN PERMISSION AND THEY MUST BE LINKED BACK TO THIS BLOG.
Back to top