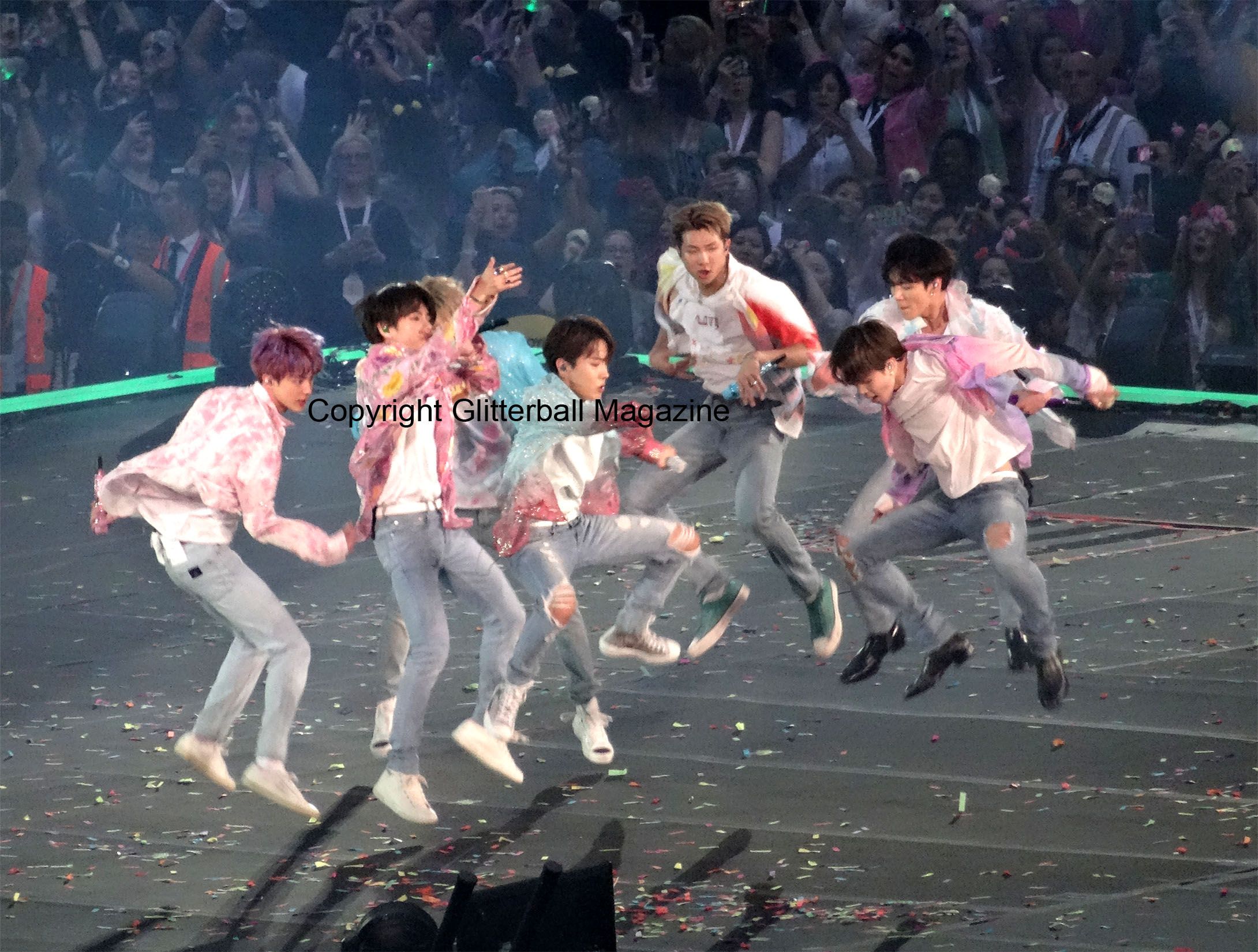 Global sensations BTS opened the first London date of their sell-out Speak Yourself tour with a thrilling performance of Dionysus. Screaming BTS Army of all ages lapped up this fist pumping, foot stomping K-pop anthem.

Making a grand entrance on a stage adorned with towering panthers and Greek style columns, it was a totally appropriate set considering the song is inspired by Greek mythology. 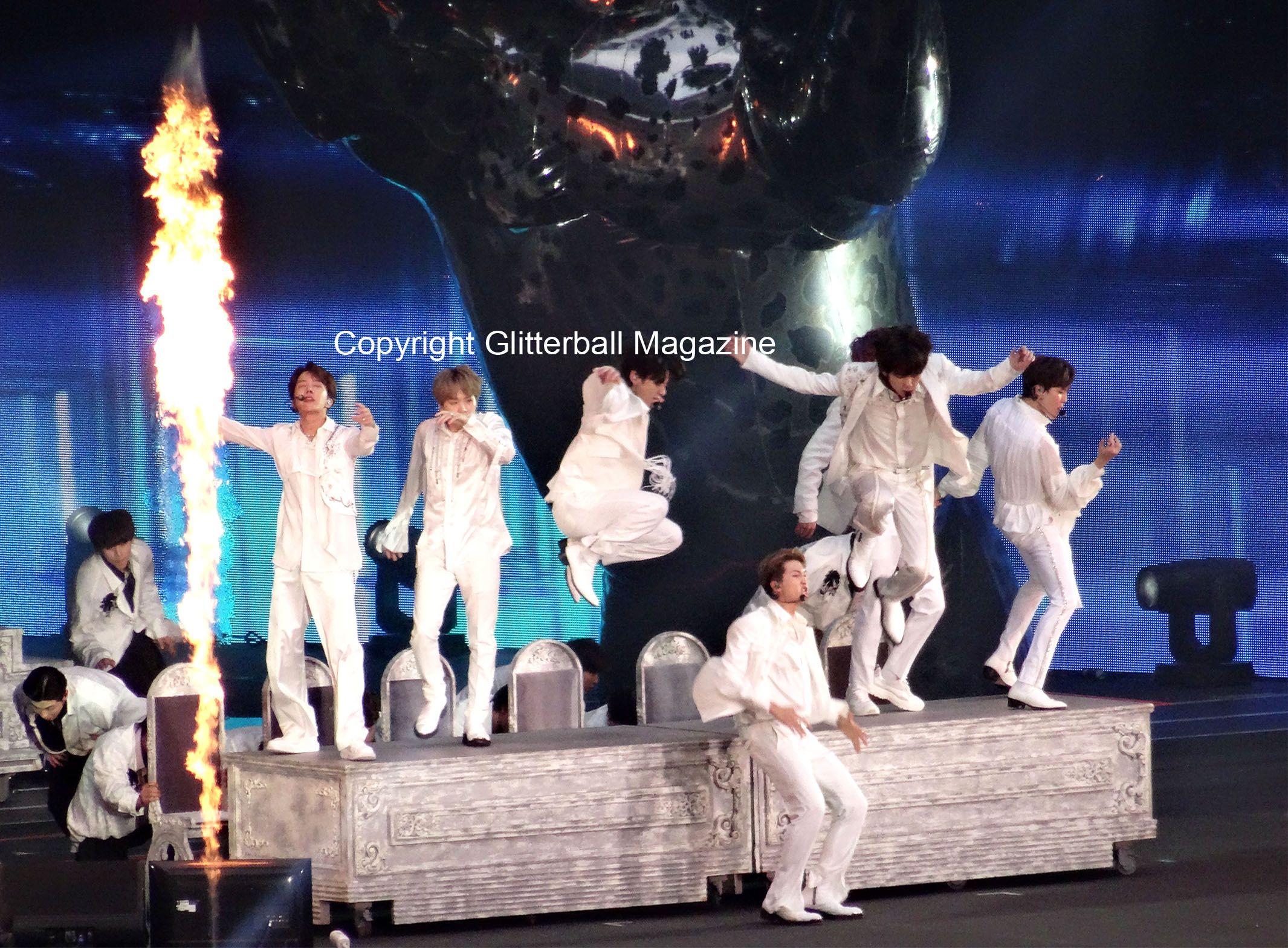 Taking over Wembley Stadium for two nights, the world’s current biggest boyband are the first Korean band to play at the iconic London venue. Given their rising popularity across the world, it’s hardly surprising that tickets sold out within 90 minutes. K-pop’s a big thing, you know. 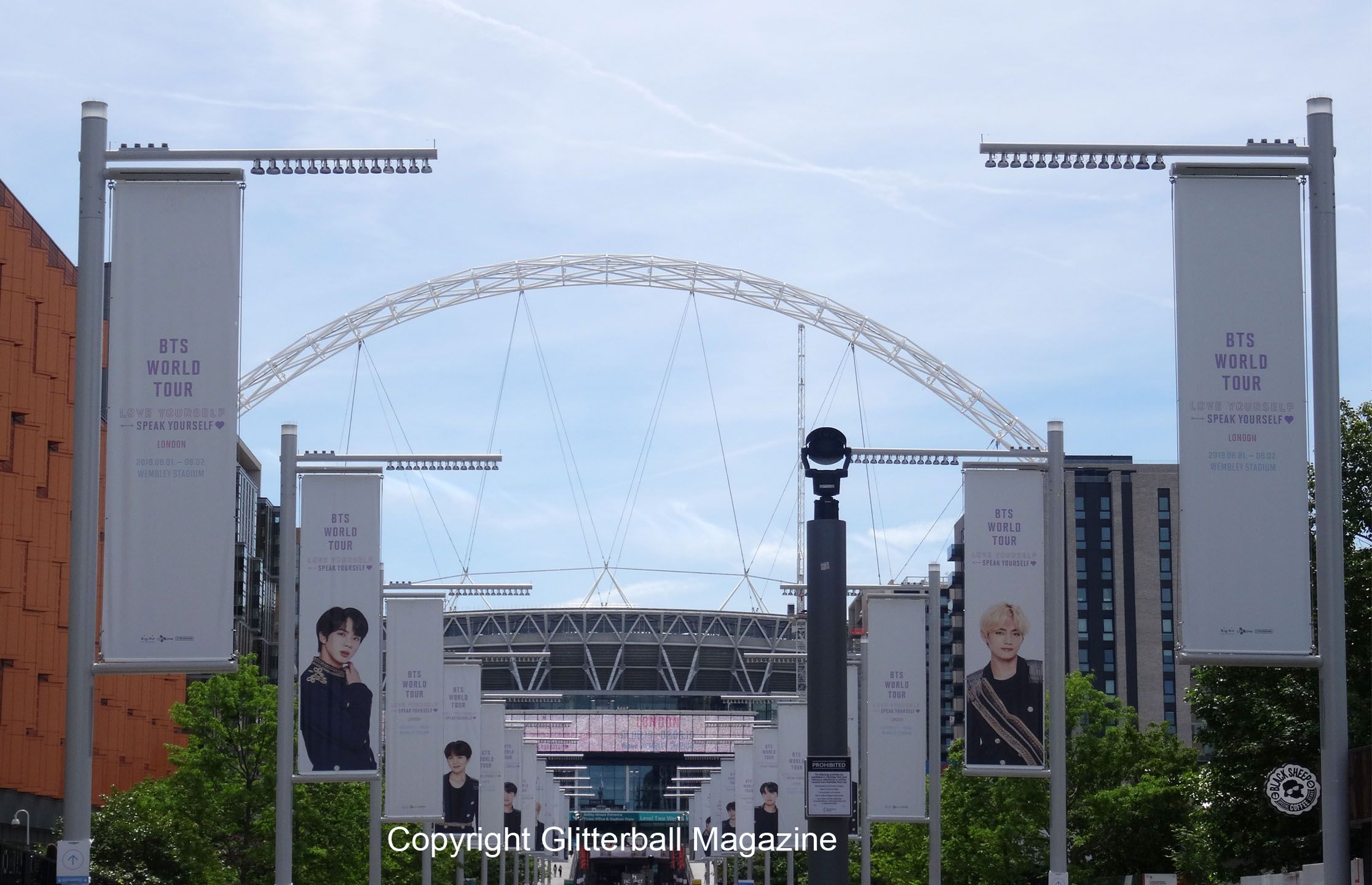 Familiar favourites on the BTS Speak Yourself tour

The same video interludes from their 2018 tour peppered the BTS Love Yourself: Speak Yourself concert and showed the handsome septet having fun and carrying on. Girls and women around the stadium swooned whenever their bias (meaning your BTS favourite member) appeared on-screen. It’s safe to say the BTS Army have so much love for Suga, RM, J-Hope, Jungkook, Jin, Jimin and V. I’m proud to be a fan. 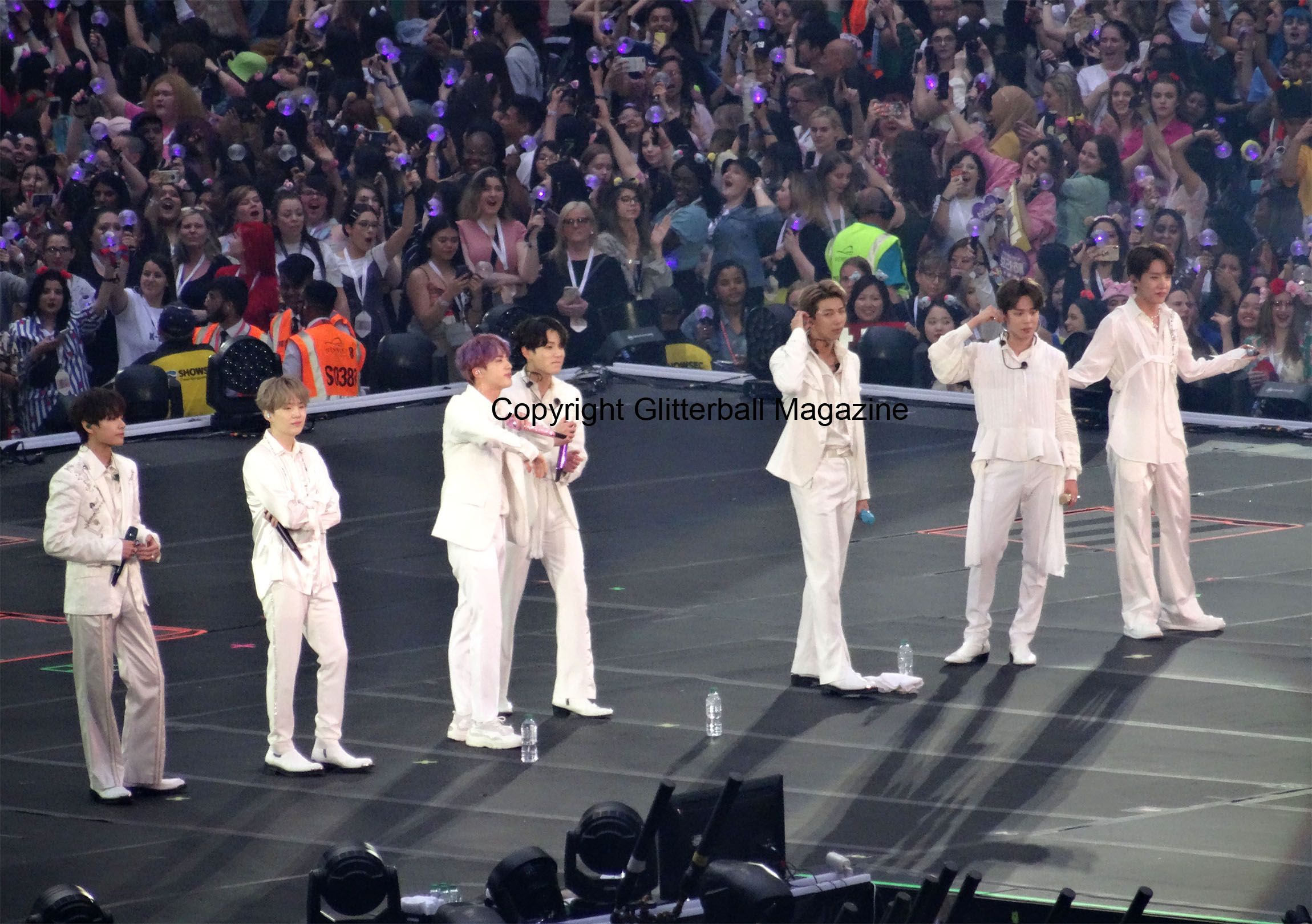 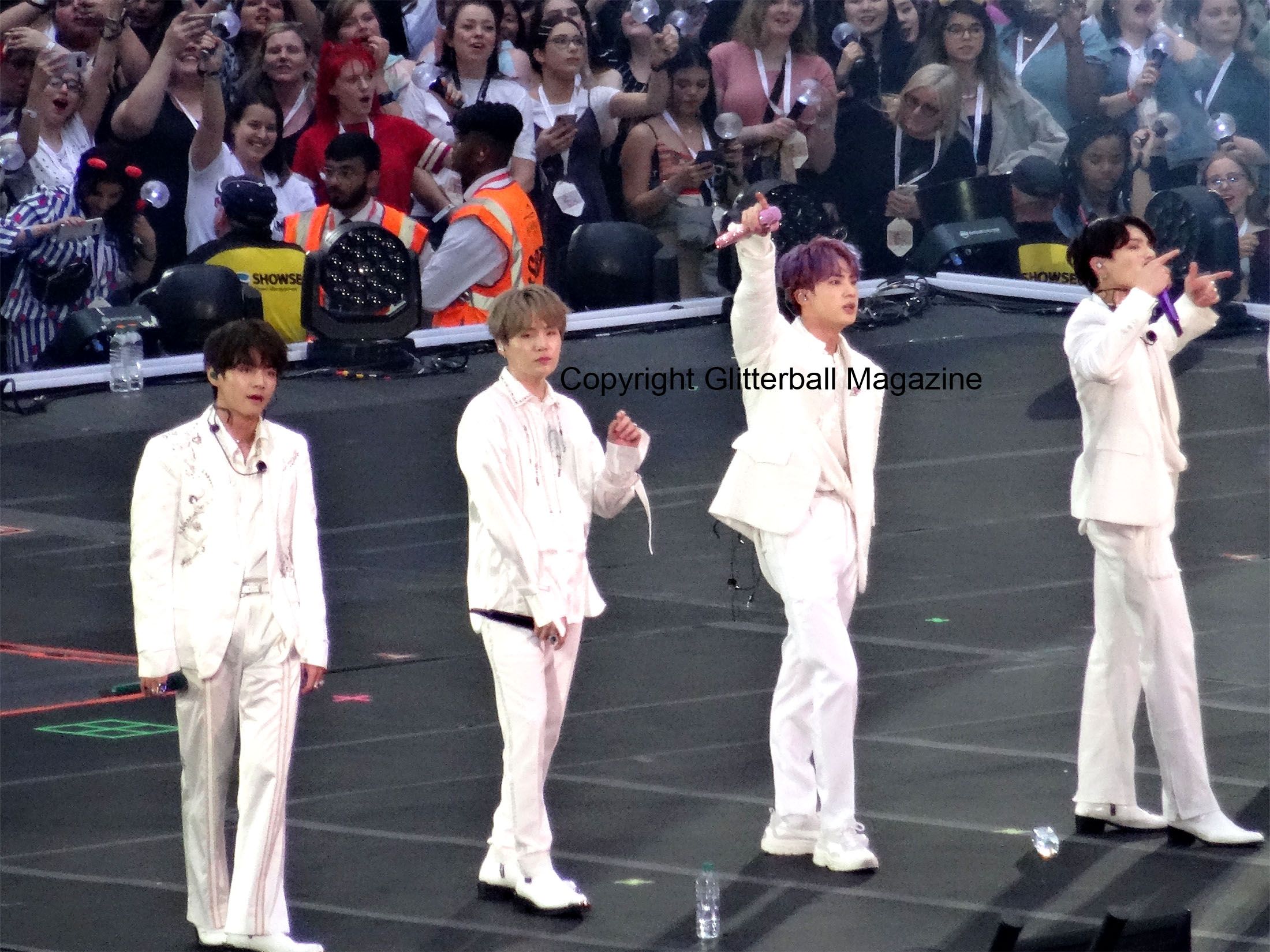 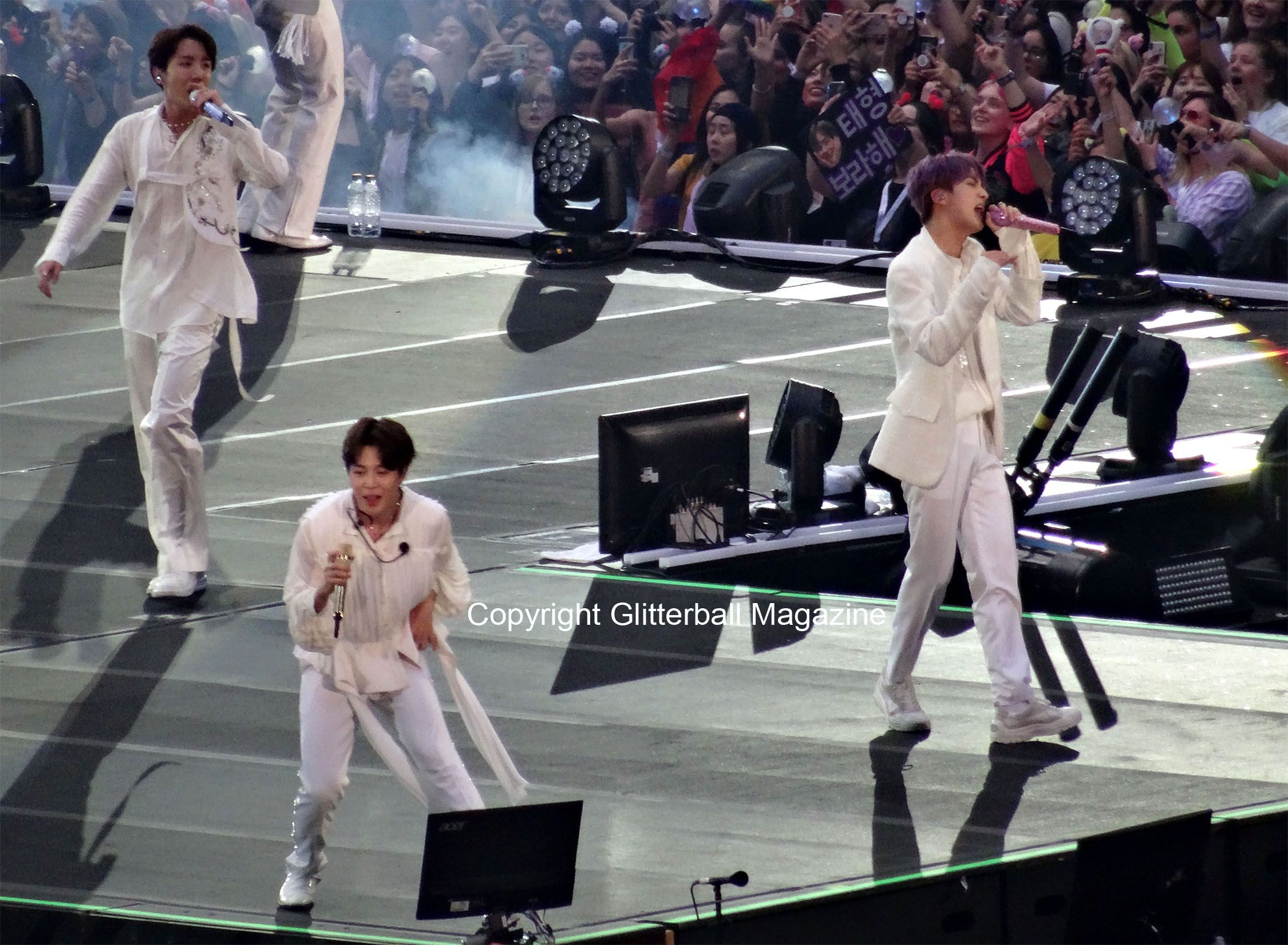 Not Today from their You Never Walk Alone album got everyone up from their seats. Whether you’re fluent in Korean or can get by with singing the easier lyrics, the entire audience had immense fun. I’ve seen BTS once before but I’ve never experienced a show with as much electric energy!

BTS concerts give all members an equal opportunity to showcase their solo songs, whether it’s an emotional ballad or an upbeat rap track. Ever the suave namja (man in Korean), J-Hope was on fine form during his solo performance of Trivia: Just Dance. Showing an impressive stage presence, he glided across the floor with smooth dance moves. He’s a bona fide star. 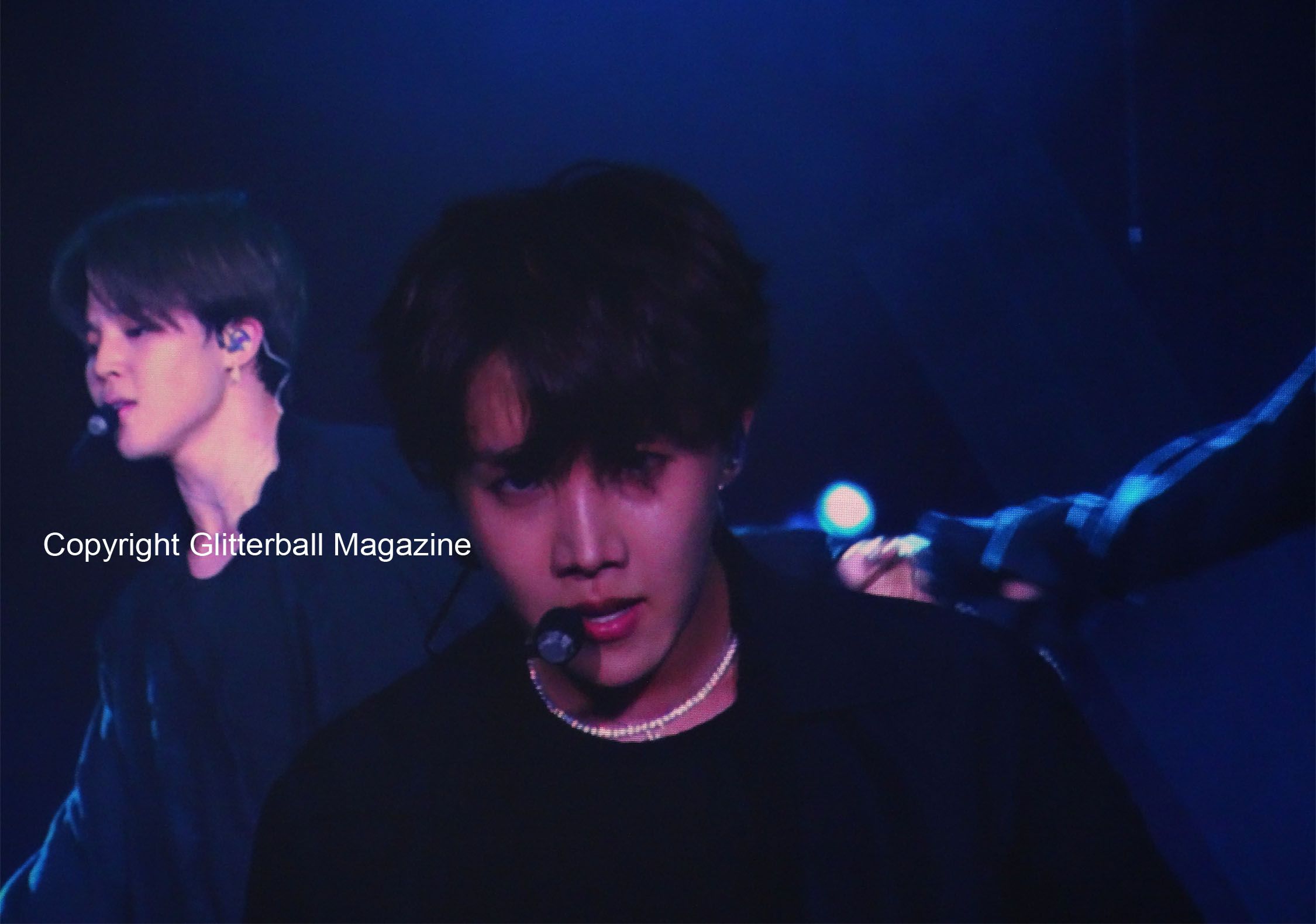 Euphoria by the youngest member of BTS (also known as a maknae in Korean), Jungkook was a crowd-pleaser. During his uplifting performance, Jungkook showed off his incredible flexibility with an effortless dance routine supported by backing dancers. He was even raised up above the crowd on a zipwire to screams from the adoring crowd below.

Other solo BTS classic songs included a beautiful version of Serendipity performed by Jimin and Trivia: Love by RM, the group’s charismatic leader. Not to be outdone by his bandmates, V appeared on an upright bed dressed in silk pyjamas and smouldered throughout his solo song, Singularity.

Suga upped the pace with Trivia: Seesaw and a purple-haired Jin (arguably the most visual member of the group) entranced 60,000 fans with a heartfelt rendition of his piano ballad Epiphany. Pretty sure there weren’t any dry eyes in the house. 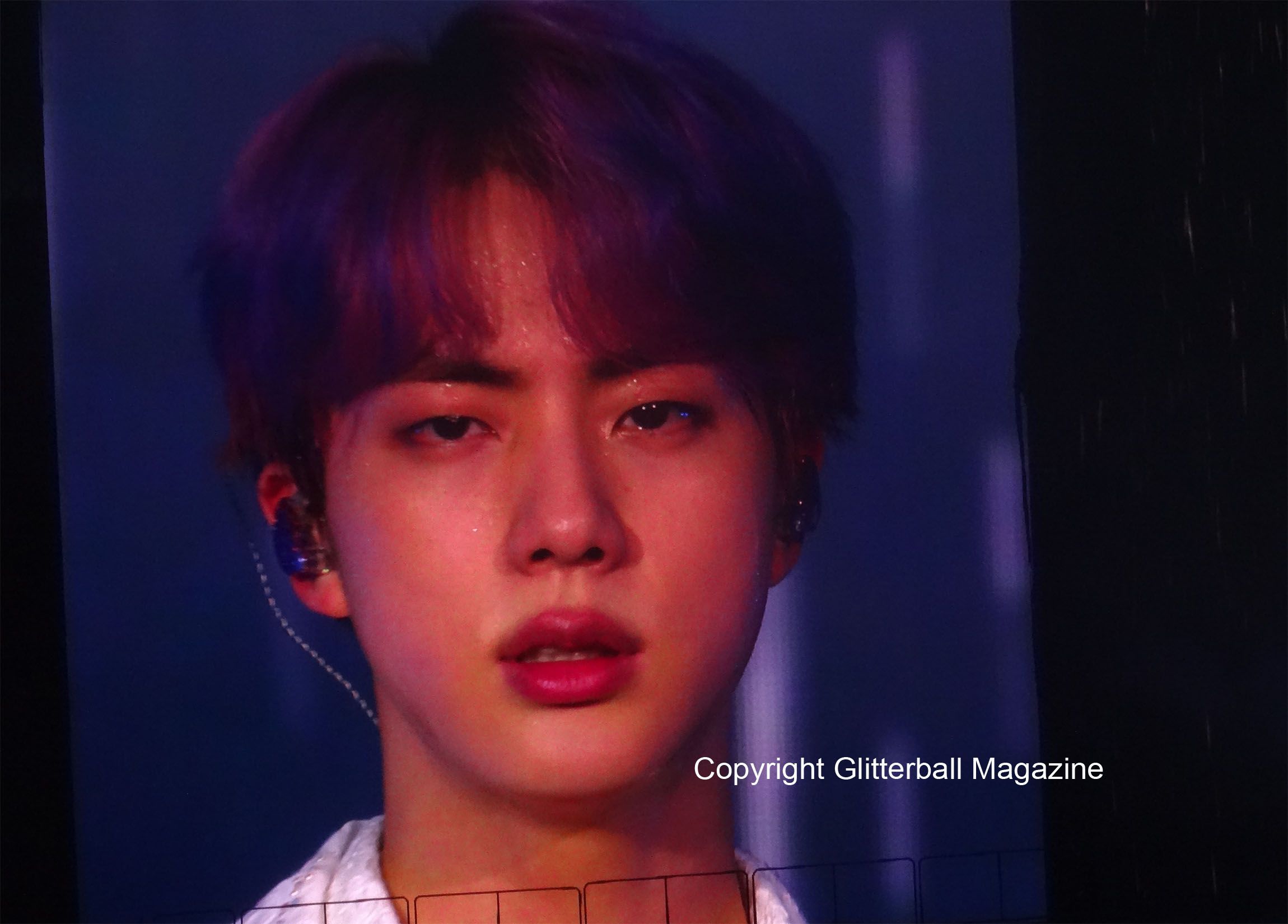 Like previous tours, the Love Yourself: Speak Yourself tour featured popular hits from the BTS back catalogue. This included Best of Me, a mash-up of Dope/Baepsae/Fire, IDOL, Fake Love, The Truth Untold, Outro: Tear and So What. Of course, it gave the dewy-skinned popstars the chance to promote their latest album, Map of the Soul: Persona. An energetic performance of Boy With Luv thrilled fans who were powerless to resist singing along. 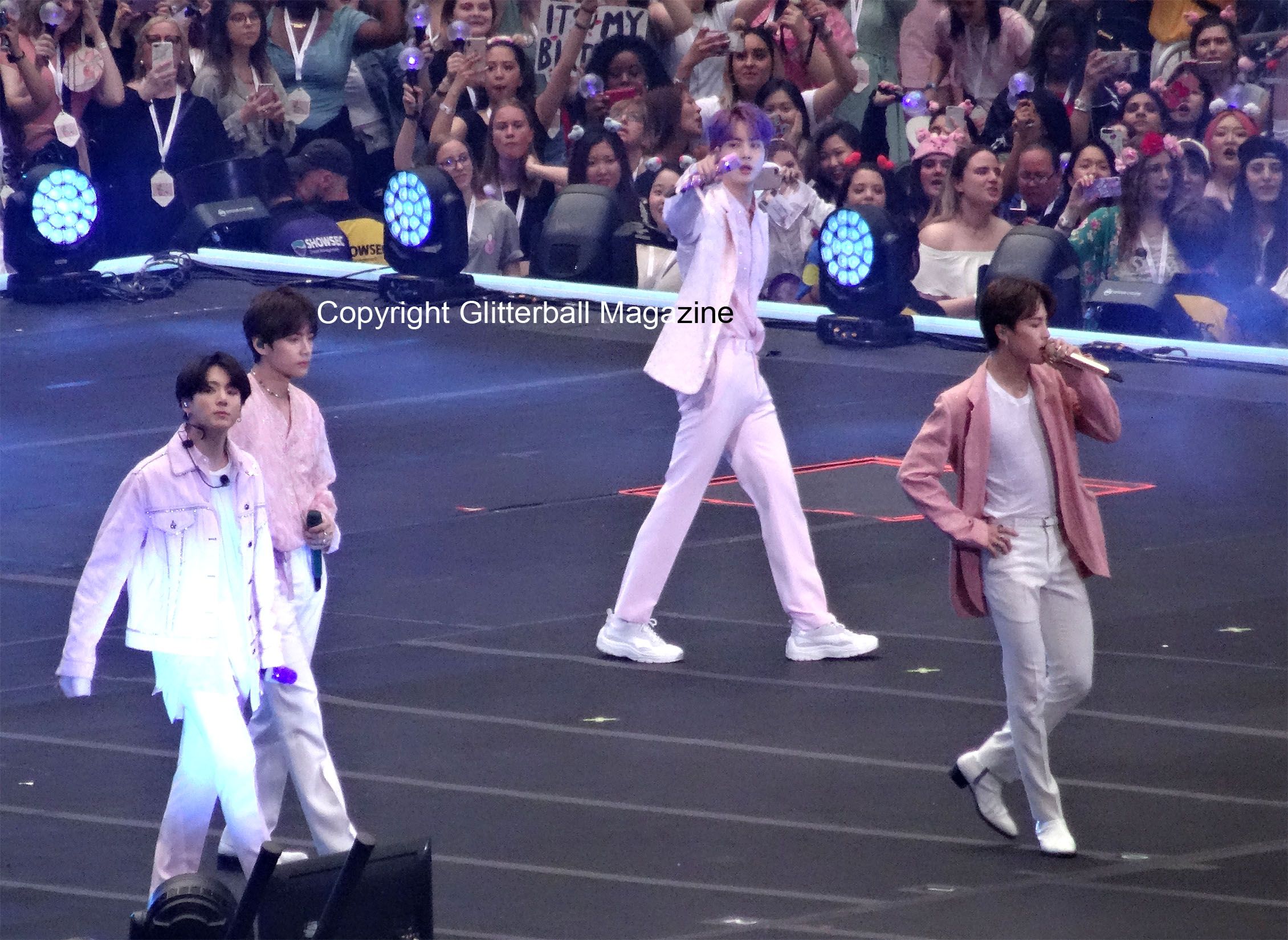 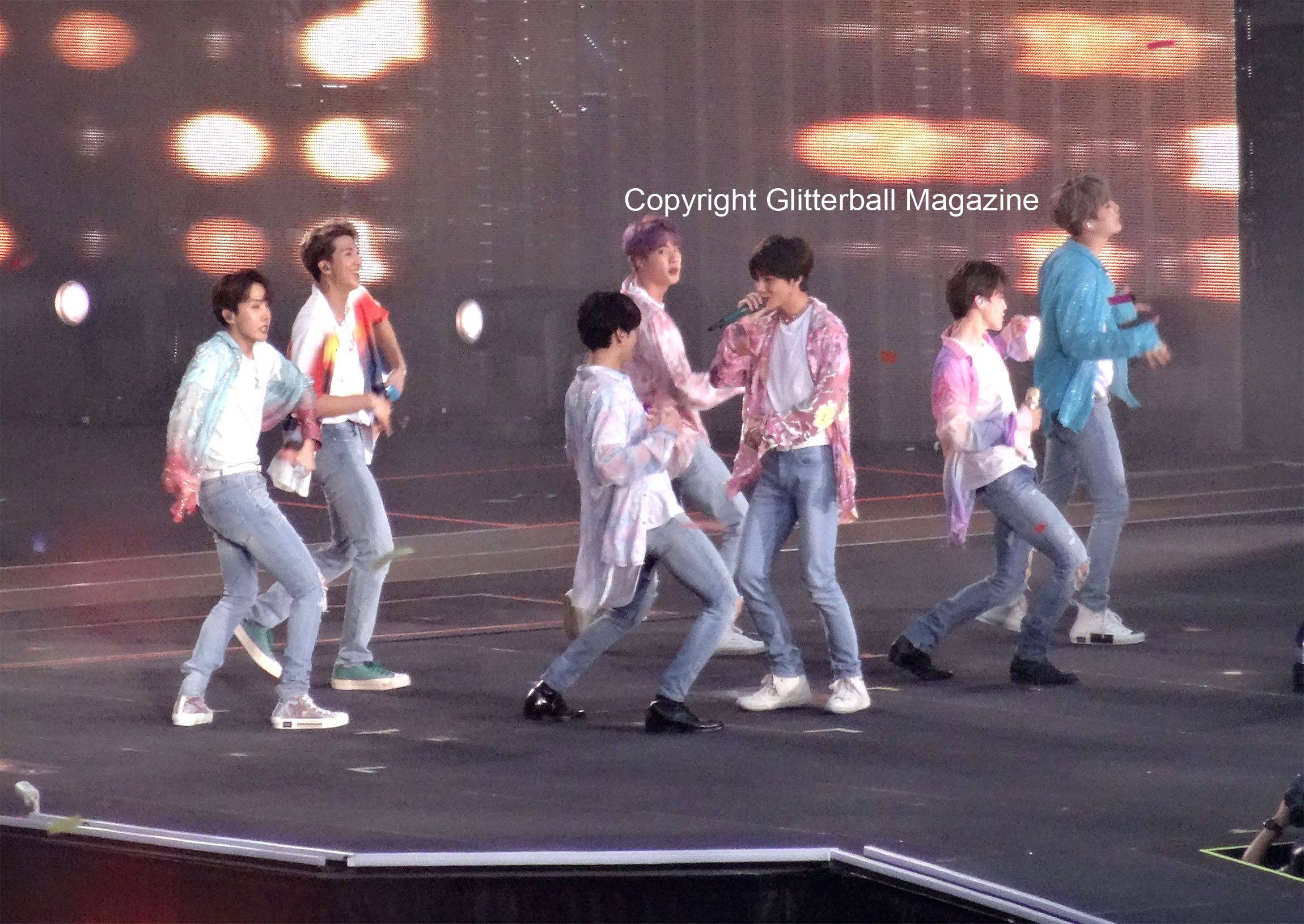 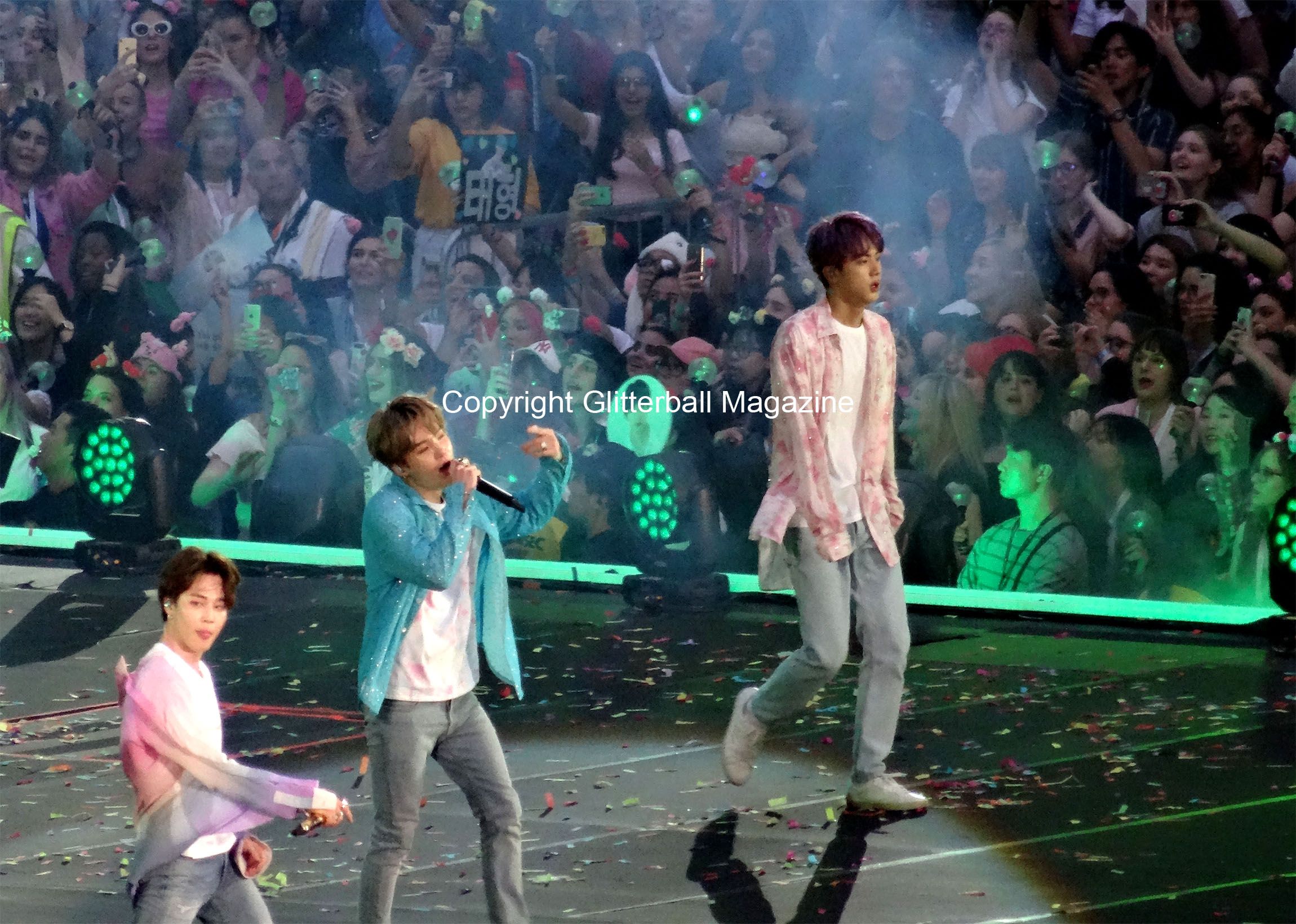 I loved hearing my favourite BTS songs, MIC Drop and Anpanman. During the latter, the boys jumped on the giant colourful bouncy castle, which had a superhero cut out section. A perfect way to highlight the song’s encouraging message. They really do put their heart and soul into everything they do.

Thrilled to be back in London in 2019, BTS also showed of with their best British accents. They entertained the audience for over two hours throughout the BTS Speak Yourself setlist. Sweat was dripping from their foreheads (thanks to the intense London heat) but that didn’t dampen their spirits. 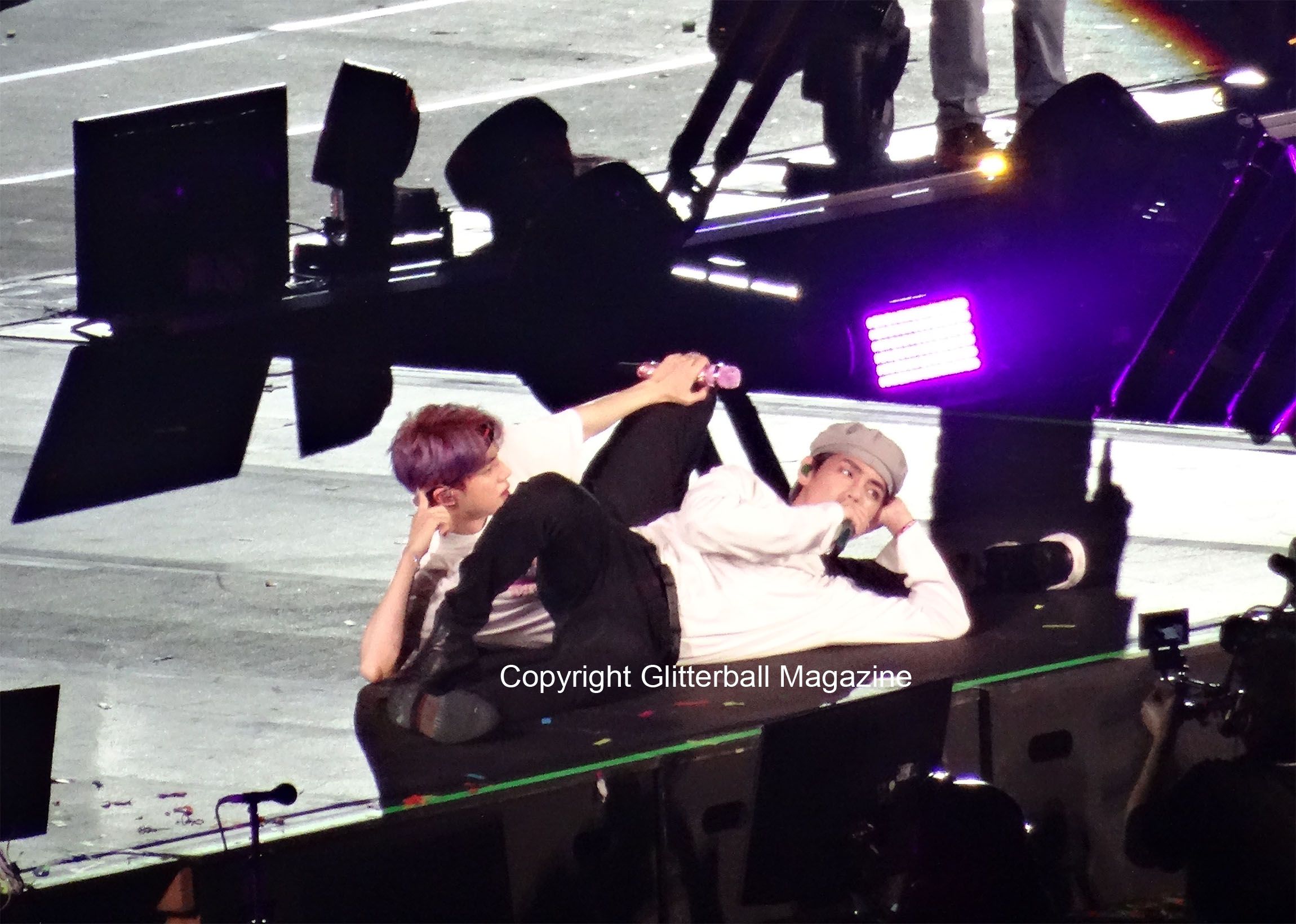 The first tack in their encore, Ay‐Oh was a nod to one of London’s biggest bands, Queen. Granted, I’m not really a fan of Queen and considering BTS arereferred to as the Korean Beatles, I would have preferred a cover of The Beatles. Maybe next time! The two final tracks on the Speak Yourself tour, Make It Right and Mikrokosmos cemented their status at K-pop gods. Fireworks were the perfect finishing touch to such an electrifying evening! 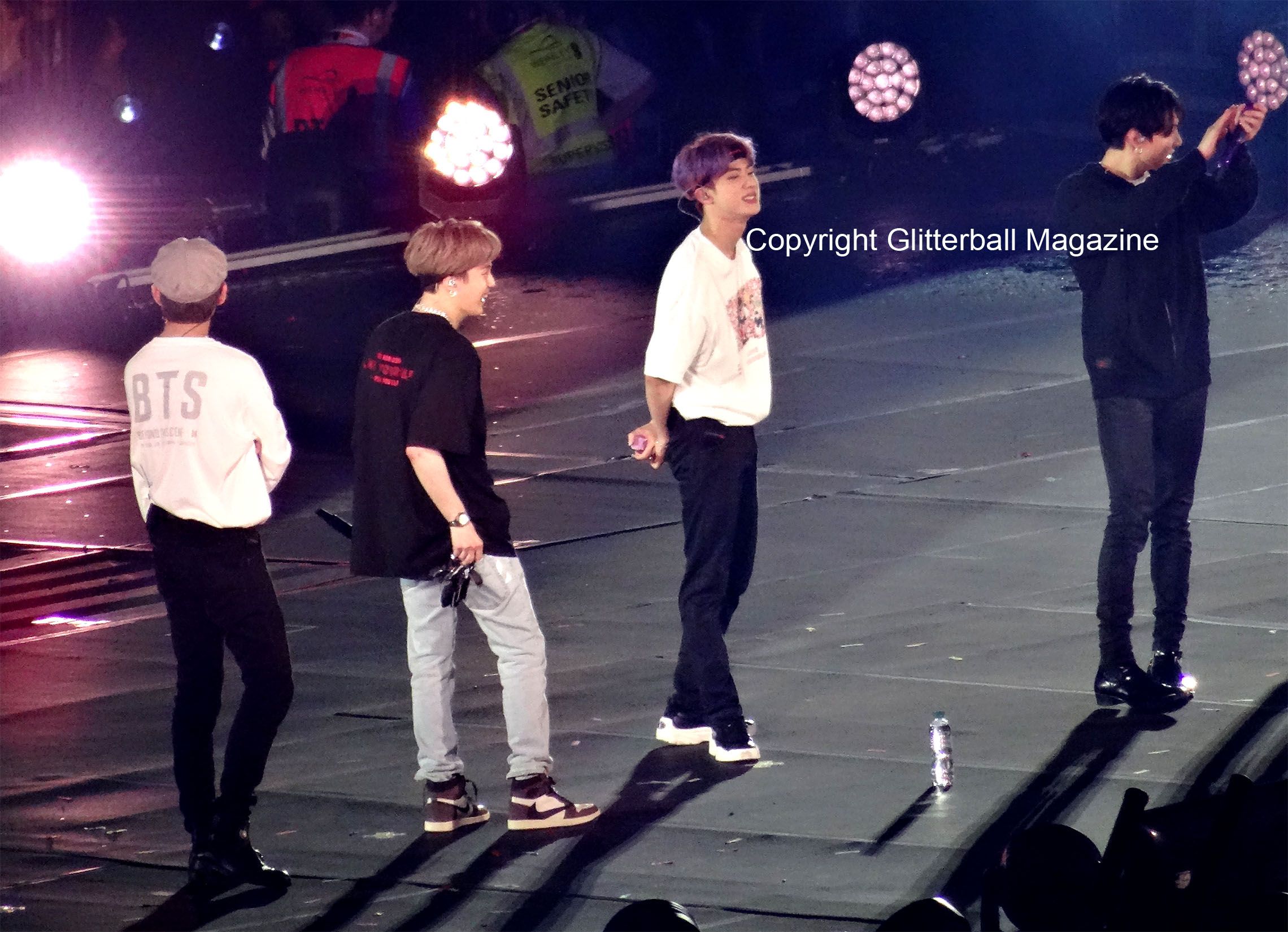 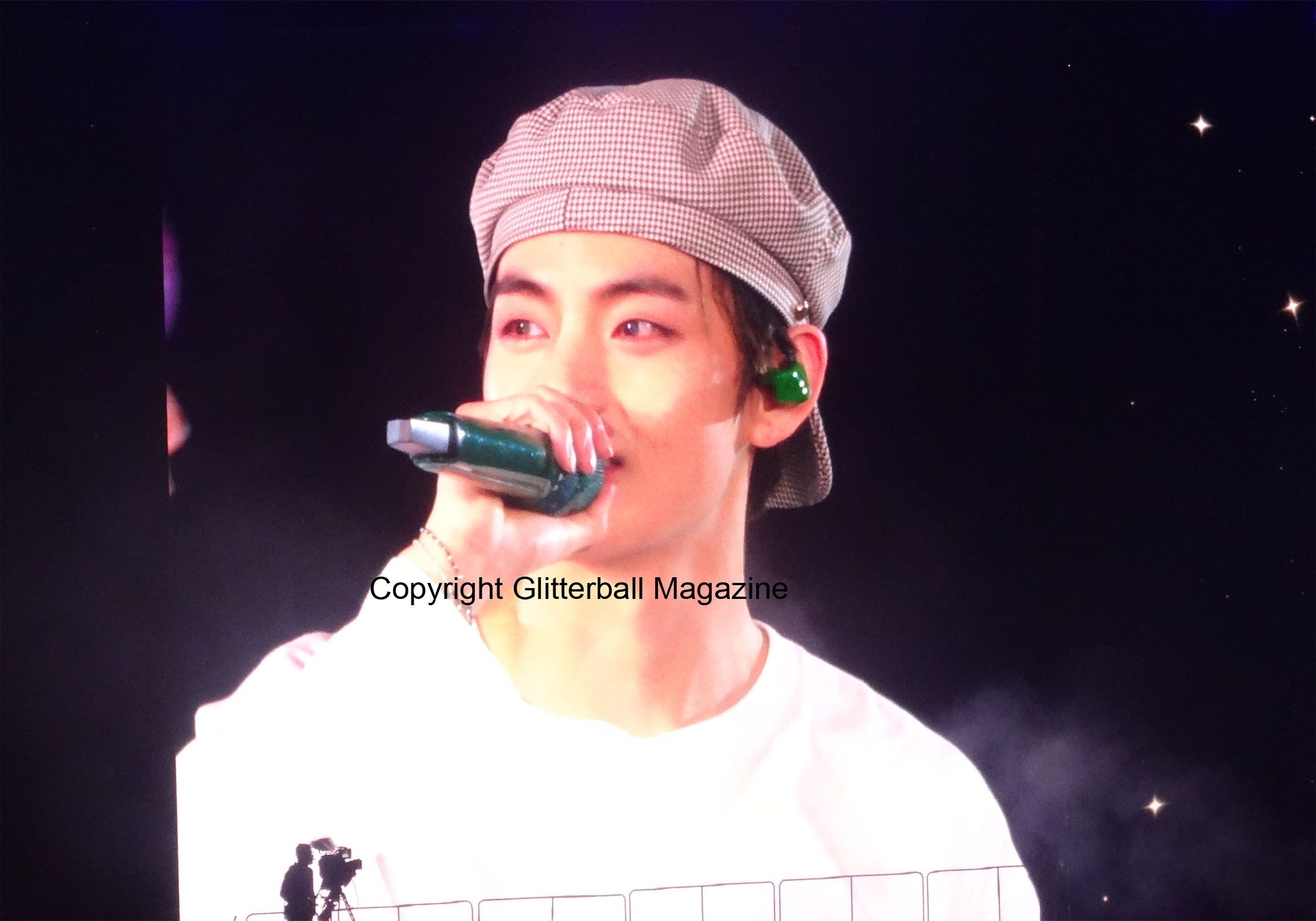 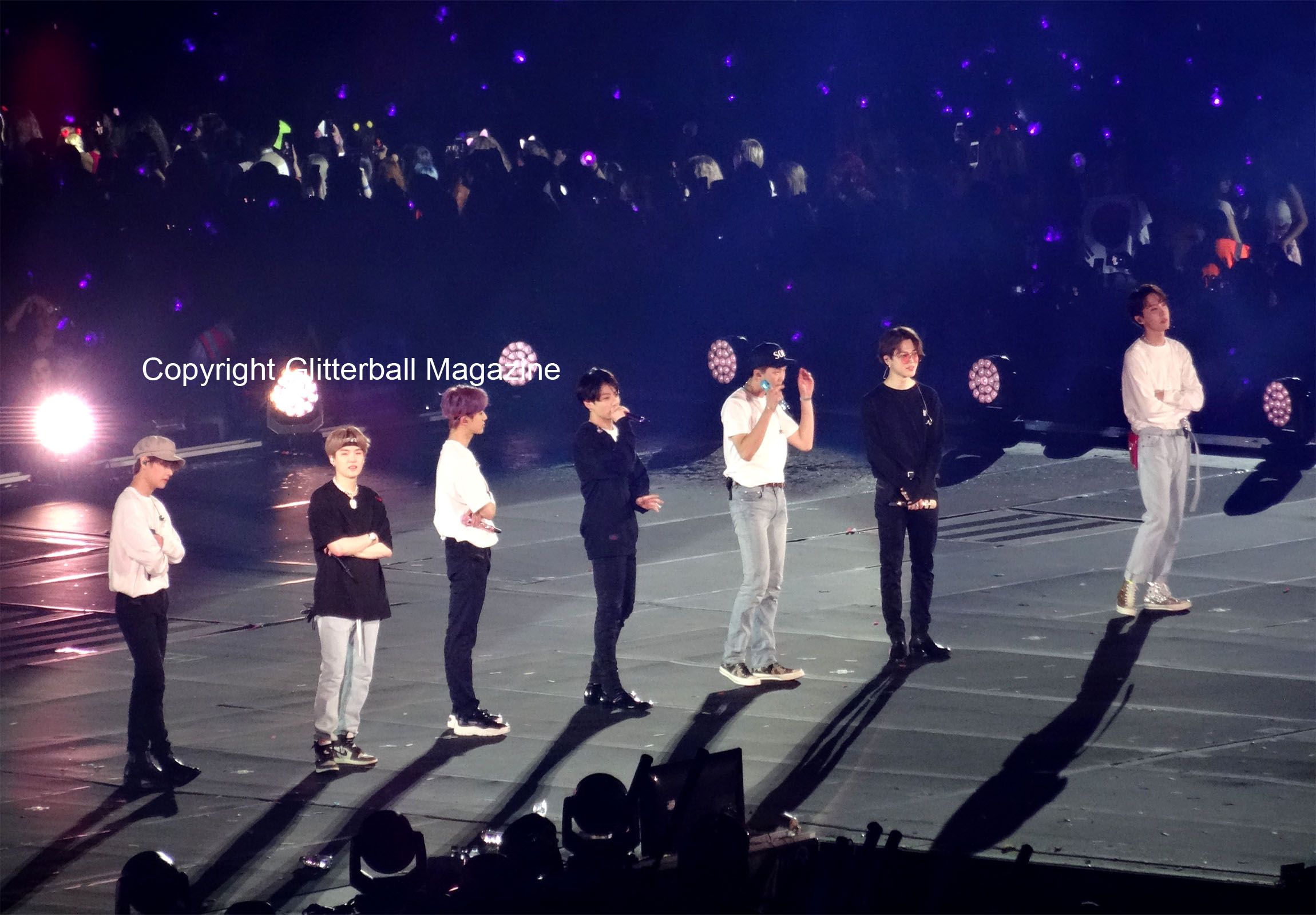 Stay tuned to see my BTS merchandise haul. If you want to find out how BTS get glowing skin, why not discover my review of the Mediheal BTS sheet masks?

Love you review darling and congratulations for those fab” pic

Thank you so much Marcela! I’m so pleased you loved the review and photographs. Very difficult to keep my hands steady haha! <3

I’m sure I’m not the only one who takes fashion inspiration from the 90s. After all, the decade had so much to offer:...
COPYRIGHT MICHELLE WINTER 2015-2022. ALL RIGHTS RESERVED. NO CONTENT TO BE REPUBLISHED WITHOUT PRIOR WRITTEN PERMISSION AND THEY MUST BE LINKED BACK TO THIS BLOG.
Back to top