AN EVENING WITH NOEL FIELDING IN EDINBURGH 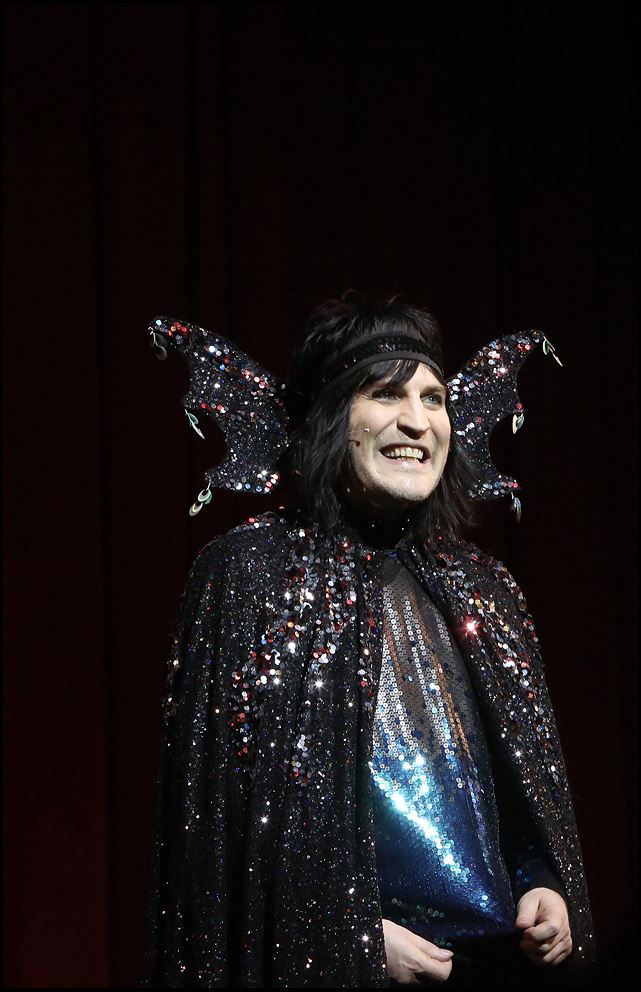 It’s not every day that Noel Fielding tells you you’re beautiful. That was DEFINITELY the highlight of the Edinburgh date of his An Evening with Noel Fielding tour for me. We’ll get back to that later.

I’ve been a fan of Noel ever since he appeared on TV screens in a mirrorball catsuit and metallic boots as Vince Noir in the cult comedy show The Mighty Boosh. I still remember the words to Boosh songs.

Noel walked onstage at the Edinburgh International Conference Centre to rapturous applause dressed in a glittered cape (where DOES he get his clothes from… we must exchange notes!). Although he’s a youthful 42, he spoke of the perils of being over 40, such as walking with his hands behind his back (‘Who am I? Prince Charles?!’) and extreme hangovers. He likened over 40s to a day old helium balloon (‘You’re not on the sky and you’re not on the floor, you’re sort of floating in-between.’).

Throughout the evening Noel entertained everyone with various monologues and sketches. He recalled a monkey invasion during a holiday to Costa Rica.

Noel burst into a childlike Milk Song, mocking the middle class milk varieties of almond, rice and soya (the first two are actually my favourites) which had the audience in stitches. He induced fits of laughter with his tea bag dream in which he was an unloved tea bag left forgotten in a kitchen cupboard.

Being in Noel Fielding’s inner circle must be the best place in the world. Half-way through a particularly surreal Chicken Man sketch he said, ‘I’m not sure if this is comedy or a mental breakdown.’

When he attempted to be serious with tales of his unfaithful wife we initially felt sorry for him. Any sympathy in the room vanished as the full details of the affair were announced: his wife (played by his brother and Boosh co-star Mike Fielding) was fooling around with an oversized triangle. Called Gordon. Yep. The show was THAT surreal. 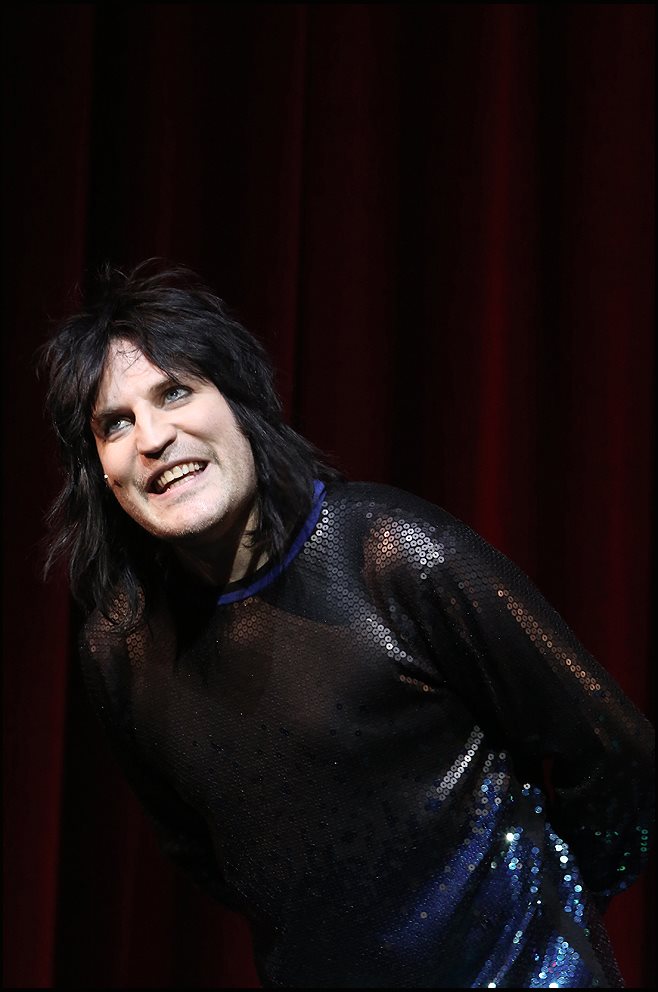 Other characters included a plasticine Joey Ramone and Noel’s understudy Antonio Banderas, both played by the wonderful Tom Meeten.

Noel disappeared for the second half, he’d been kidnapped! What?! Who was that bursting onto the stage in a homemade policeman’s uniform? It was Sergeant Raymond Boombox (played by Noel) who had to find Noel’s kidnapper.

As Sgt Boombox climbed into the audience to interrogate fans I was terrified because my seat was at the end of my row. He worked his way around people teasing them. My heart was pounding with a mixture of nerves and excitement….

Sgt Boombox was getting closer, he was only a few rows away! I turned around to see him coming towards me for a fresh interrogation. Oh my god!

He grinned and picked up my faux fur jacket and bellowed, ‘Did you bring a cat to the show?!’ Everyone (including myself) couldn’t stop laughing (FYI: Noel later said he liked the jacket). He crouched next to me and asked my name.

After asking others what their jobs were and being disappointed by their answers (they were students) Sgt Boombox seemed very impressed when I said I was a journalist. He seemed to be unsure of me but when I said, ‘I have a blog’ (after he asked who I worked for) he replied, ‘A blog! That’s not going to sink me!’ He was very impressed to see a like-minded creative soul.

Sgt Boombox said, ‘I have to tell you you look beautiful tonight.’ I repaid the compliment. I’m not going to lie, being this close to Noel Fielding was an absolute delight. I’ve met him many times at different events and he’s always been wonderful to chat to. Note: I may be a tiny bit in love with the man whose silver boots I’d love to steal.

The policeman with a DIY black moustache and perm asked if I’d ever committed a crime other than my ‘short fringe’ Haha, what a cheek! I couldn’t help but laugh. He asked if I’d kidnapped Noel. My denial wasn’t accepted because the sergeant consulted the Hawkeye adjudicator on the big screen. Sgt Boombox asked if ‘the girl with the short fringe had kidnapped Noel.’

The results were in… NOT GUILTY! Yay! After his unsuccessful investigation it was up to Fantasy Man and BigChief Woolabum Boomalackaway (played by Noel and Tom) to help. Eventually a volunteer from the crowd called Steve saved the day and rescued Noel. Hurrah!

I thoroughly enjoyed the show but there was one awful part: the end! In a world of mundaneness and predictable jokes, it’s a blessing to have a talent like Noel Fielding!

Noel Fielding is currently on tour with An Evening with Noel Fielding until 9th April 2016. For more information go to noelfielding.co.uk/tour

Black is such a good colour to wear if you want to look effortlessly chic but why should your clothes get all the glory?...
COPYRIGHT MICHELLE WINTER 2015-2022. ALL RIGHTS RESERVED. NO CONTENT TO BE REPUBLISHED WITHOUT PRIOR WRITTEN PERMISSION AND THEY MUST BE LINKED BACK TO THIS BLOG.
Back to top